hello! i have made some progress on the arm warmers:

the recipient wants them to be opposite colors.. which im cool with, its much easier to see gray yarn than black. it also photographs much better. the fingers on the first glove came together much more quickly than i thought they would.. they were kinda tricky though. picking up stitches from existing fingers was difficult, and while i had 3 dpns in each finger hole i was scared that some of them would slip out.  i thought it was going to look horrible because the stitches seemed to have wonky tension, but when i completed it, i think they look fine (for my first try at knitting finger holes, anyway). to bind off the fingers i used what i *think* is a double crochet bind off.. the stitches i ended up making dont look like double crochet, but single crochet. so i guess ill just refer to it as ‘single crochet bind off.’
i want to be finished with this project!! 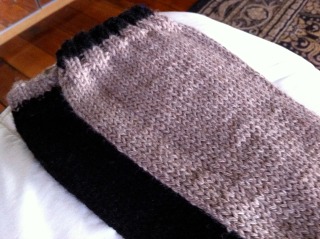